Everything About Sailing in & Around Sotogrande

Yachting and Sailing around Sotogrande

The southeastern coast of Spain offers few sheltered anchorages and no sizeable estuaries so, for those sailing the coast the purpose-built marinas are essential. Fortunately, they tend to be spaced a convenient distance apart to allow day sailing between them. For those with engines, there is plenty of time to explore the coast, anchor off for lunch and arrive in the next port in plenty of time for ‘sundowners’. 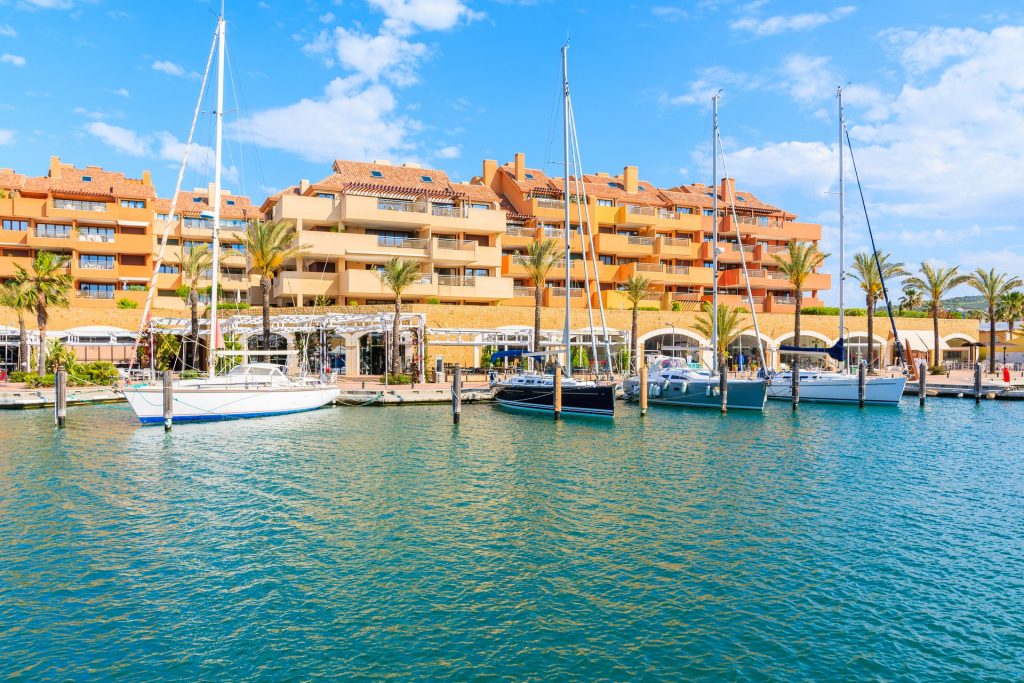 Puerto Sotogrande is the westernmost marina in the Mediterranean. It is therefore the first available for mariners entering the Mediterranean and the jumping off point for those heading west into the Atlantic Ocean through the Strait of Gibraltar. It is also reckoned to be one of the most beautiful harbours in Europe.

The marina is ‘Mediterranean traditional’ with a stone and concrete breakwater enclosing the general berthing area. A passage at the western end leads to an even more sheltered berthing area used by those who own both property and boat. At its extremity, this area has islands connected to the mainland by bridges. The islands support apartments and the bays between creating an atmosphere of ‘Norfolk Broads in the Mediterranean’.

The marina boasts 1,382 berths ranging from 6 to 70 metres LOA, all the usual services, fuel and gas, boatyard, storage and workshops, chandlery and water and electricity. Sotogrande marina also has a gym.

Throughout the marina area, there are a plethora of restaurants and bars offering every cuisine imaginable.

For those on holiday wanting to experience life at sea, there is a luxury motor yacht available for day hire, with skipper, from Sotogrande. Up to 10 people can enjoy one or more days dolphin watching in the Straits, offshore kiteboarding, swimming and snorkelling, or just enjoying the scenery while dining in style.

The highlight of the year is the Sotogrande Classic week held in July. This regatta is for boats in the 15 Meter Class and you can expect to see famous boats such as ‘Mariska’, ‘The Lady Anne’, ‘Hispana’, and ‘Tuiga’. The boats move on to further regattas in the Balearics, San Remo and San Tropez. 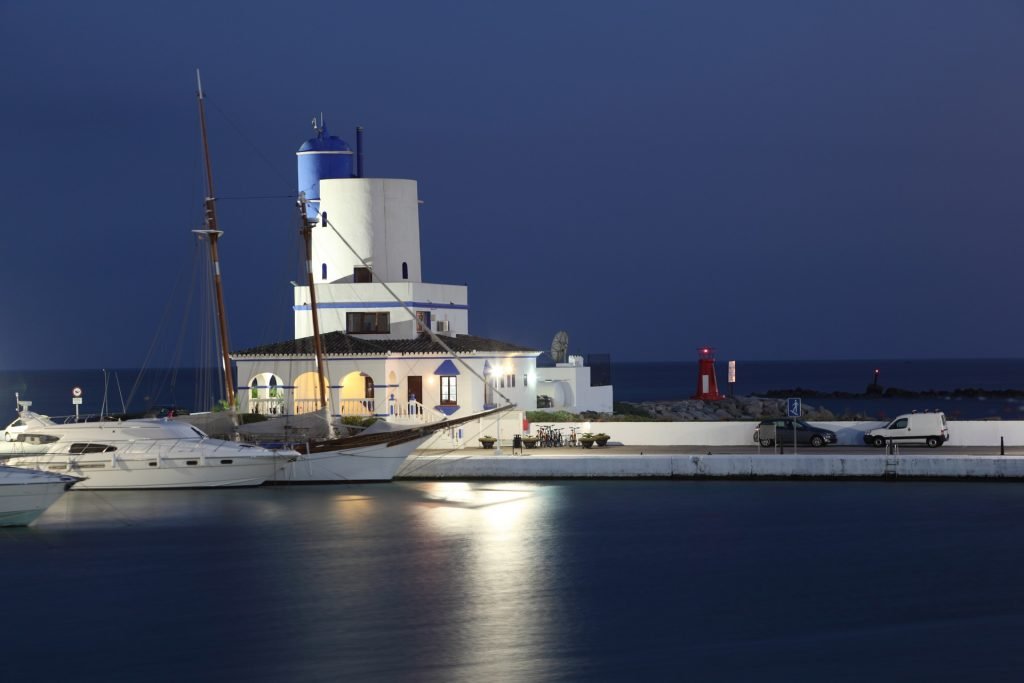 10 km north of Sotogrande is the picturesque marina of Puerto de la Duquesa. Unlike Sotogrande, Duquesa also provides berths for the local fishing boats that depart daily to fish offshore.

Purpose built in the 1980s, Duquesa sits around three sides of a marina that berths boats that range from the few hundred thousand pound gin palace that hardly ever leaves the safe confines of the harbour to the workhorse dinghy with an engine that putters out each morning for fish. Its owner no doubt prefers the ease of the marina to the more traditional methods of getting your boat in the water seen at Sabinillas and Castillo. There the parsimonious fishing folk pull their boats up the beach using a human-powered windlass somewhat similar to the capstan used to raise the anchor in a 17th-century sailing ship.

Duquesa has all the usual facilities for the mariner, boatyard, lifting equipment, fuel, water and electricity. Surrounding the marina on three sides are a multitude of restaurants and bars. Many have live music in the evenings.

You will also find boats for hire for fishing, dolphin watching and pleasure cruises. 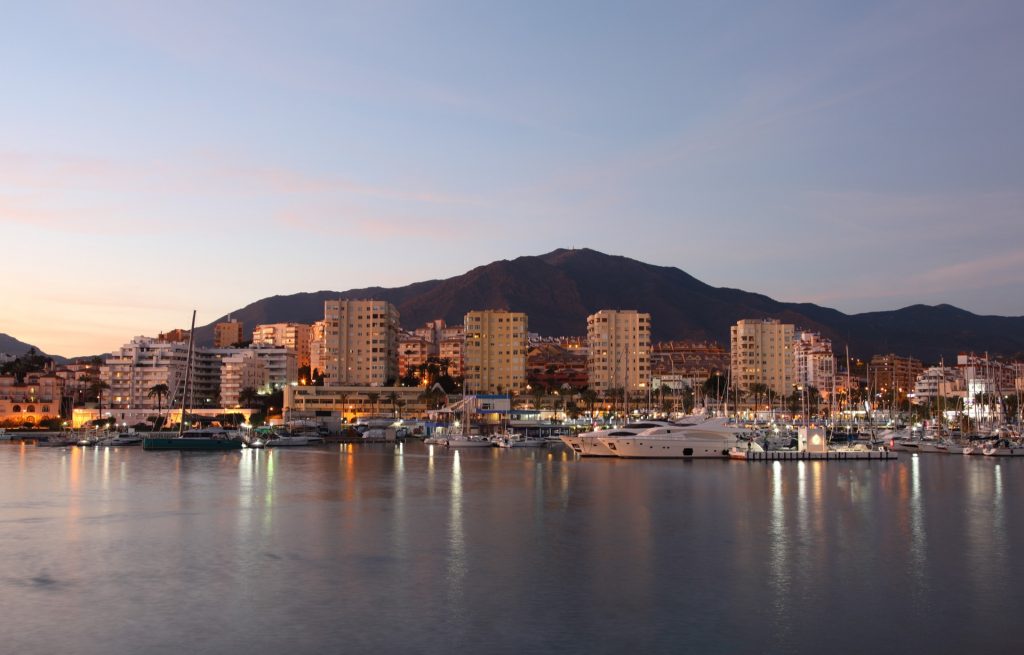 Twelve kilometres northeast of Puerto de la Duquesa is the port and marina of Estepona. Estepona is an old town, dating back to the Romans and before and people here have fished for hundreds of years. Overlooked by its control tower, the marina offers shelter and moorings to a mix of boats from the local fishing craft to luxury sailing and motor cruisers. Estepona has a thriving fish market through which much of the catch is processed daily. Some then appears on the local supermarket fish counters and the remainder in the local fishmongers or Pescadero of which there are many in the town. The moorings are surrounded on the land side by restaurants offering food from all nations and bars offering refreshment of a liquid sort, all looking out on the deep blue Mediterranean Sea. On the eastern end of the marina on a promontory, sits the lighthouse. It’s light still guides the mariner at night and during spells of poor visibility whilst in its shadow nestle the fisherman’s huts where, each Sunday, an ages-long tradition is maintained. Whole families and their many extensions descend for a family reunion and meal. On the menu, fish of course.

Estepona port has everything the visiting mariner could require. Visitors to the port will also find boats available for hire by the hour or day from catamarans and ketches catering for12 passengers to fishing boats and small motor cruisers for family excursions.

The port area is popular with the Spanish residents from the town, Reinaldo’s Bar is a fashionable place to be seen on a weekend evening. There is a vast range of restaurants; it seems that every nationality is well served. 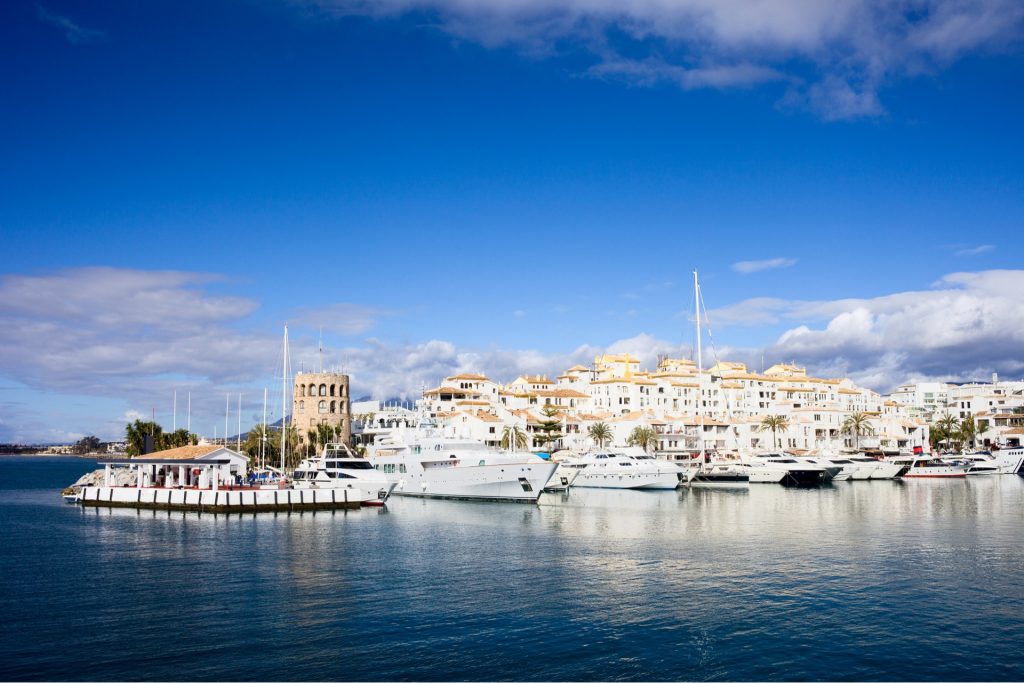 The next leg up the coast is a little further, 21 kilometres northeast by land and sea to Puerto Banus. Banus has its own unique history.

Decades ago Puerto Banus was a small fishing village. It is tough to imagine that now, but anybody that does remember those days will be amazed at the transformation.

The story started in 1966 when Prince Alfonso de Hohenlohe invited the architect Noldi Schreck, who had participated in the design and build of Beverley Hills, to look at his plans for what became the Marbella’s Golden Mile. This involved a meeting with Jose Banus, a local property developer who wanted to build high rise properties on top of a small local fishing village. Being a personal friend of Francisco Franco, he may well have achieved this objective if Schreck had not persuaded him that a model Andalucian style village around a tasteful marina would make him more money. The resulting port became the first to be designed by a single architect and was named after its builder. The guest list for the opening ceremony in 1970 included such notables as the Aga Khan, Roman Polanski, Hugh Hefner, Prince Rainier and Princess Grace of Monaco. Julio Iglesias was hired for 125,000 pesetas (about 750 Euros), and 300 waiters from Seville served 22 kilos of Beluga caviar to a total of 1700 guests.

The marina, once a beach with the local fishing boats pulled up on the sand, is now home to dozens of multi-million euro boats owned by crowned heads of Europe and the Middle East, film stars and a sprinkling of self-made multi-millionaires. It is a place where even the fenders wear fur coats and helicopters replace the ship’s boat. For the vast majority of us, these vessels are so unattainable that they are beyond envy. For that reason wandering around the marina is actually quite pleasant and you never know who you will bump into. I am sure the middle-aged gentleman dripping with gold, wearing the open to the waist white shirt is somebody I have seen before, there again he could just as easily be a waiter from the fish restaurant.

Having gazed at the boats, cast your eyes inland as you walk up the jetties. Designer names nestle alongside restaurants with a scattering of souvenir shops among the cocktail and wine bars. Here you can buy a cheeky ‘T’ shirt for a few Euros or a fluffy mink beach bag for 6,000. There is no shortage of places to cool off with a drink or laze away a couple of hours over lunch just people watching and enjoying the view over the marina. Inexplicably the marina area is known as the Muelle Rivera, which translates as the easy or soft creek.

The narrow streets behind the marina only come alive at night. Here there are the pubs and clubs that have given Banus nightlife its worldwide reputation. Tapas bars provide an alternative meal choice and allow you to move from place to place having a nibble here and another there. All the while your eardrums are assaulted by the loud music emanating from open doors guarded by large heavy looking gentlemen. But this is a time and place for the younger generation and there are plenty of them about. Banus swings at night, all night.